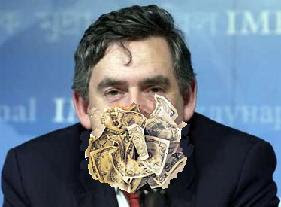 Revised figures from the Office for National Statistics (what use are stats if they have to be forever revised?) show that the the UK economy shrank by 2.4% in Q1 2009. This is the fastest rate in more than 50 years, and far worse than expected.

In related news Brown has published a "quasi manifesto" outlining his plans for his "relaunch". Unfortunately these plans will come to nothing:

1 They are uncosted, and Brown has not stated how he intends to pay for them.

2 The country is bankrupt.

3 He has been responsible (as Chancellor and latterly as PM) for the country's finances since ZaNulabour were elected in 1997. The fact that we are in this mess now is in no small part down to him.

4 Brown is not the man to rebuild/relaunch Britain, or its bankrupt economy.

5 Public sector pensions now stand at £1.2 Trillion (equivalent to 85% of Britain's GDP), this figure is unsustainable.

Brown has bankrupted Britain, yet now claims that his relaunch will save it.

Who is he trying to kid, us or himself?
Posted by Ken Frost at 8:58 AM