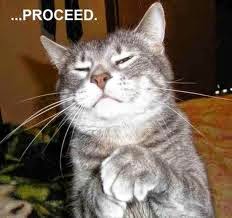 Emulating UK financial institutions that offer stuffed toys/meerkats etc as gimmicks, if you buy their products, Sberbank a Russian bank is giving free cats to people who take out a mortgage.

Sberbank is offering customers a choice of 10 cats, which will be delivered to their home.

However, homeowners are only allowed to keep the cat for two hours. They must also sign an agreement promising they will not harm the cat.

Brilliant!
Posted by Ken Frost at 9:05 AM 0 comments

Abigail Doolittle, founder of Peak Theories Research, has said the Federal Reserve's reluctance to raise interest rates from record lows could spark a market correction to rival the slump seen in 2007, during the global recession.


"Unfortunately, I think it could come on a crash similar to what happened in 2007.

You can see that the entire bull market trend over the past five years has started to reverse.

When you see that kind of gyration around the trend, typically it suggests you're going to see some severe volatility. As scary as it is, I think that we could see possibly a 50% or 60% correction - an equal and opposite reaction to all these unusual policy moves."

Maybe so, maybe not.

However, markets go up and markets go down. The world has survived previous crashes and will do so again, because the only way that people make money out of markets is for there to be volatility (both upwards and downwards).
Posted by Ken Frost at 9:42 AM 0 comments

Email ThisBlogThis!Share to TwitterShare to FacebookShare to Pinterest
Labels: recession

As yet though, she is insisting that she won't resign as head of the IMF.
Posted by Ken Frost at 9:14 AM 0 comments

The Royal Bank of Scotland has received yet another fine, this time it has been fined £14.5M by the Financial Conduct Authority (FCA) for failing to ensure that advice given to mortgage customers was suitable.

The FCA said that the fine for RBS and the NatWest reflected "serious failings" in their advised mortgage sales business. The firms failed to ensure that advice given to customers was suitable, according to the FCA. Two reviews of sales from 2012 found that in over half the cases the suitability of the advice was not clear from the file or call recording.

Customers were not advised properly over the affordability of mortgages, or the appropriate term of products being offered. Others were given poor advice when looking to consolidate their debts.

Tracey McDermott, director of enforcement and financial crime at the FCA is quoted by the Telegraph:


“Taking out a mortgage is one of the most important financial decisions we can make. Poor advice could cost someone their home so it’s vital that the advice process is fit for purpose.

Both firms failed to ensure that their customers were getting the best advice for them.

We made our concerns clear to the firms in November 2011 but it was almost a year later before the firms started to take proper steps to put things right.

Where we raise concerns with firms we expect them to take effective action to resolve them without delay. This simply failed to happen in this case.”

The FSA initially drew the firms’ attention to issues in their mortgage advice process in November 2011. However, no effective attempts to remedy the problems were made until the end of September 2012.

The fine is of course paltry in terms of a bank the size of RBS, therefore one has to question whether it is in the slightest way effective in "managing" the future behaviour of banks.
Posted by Ken Frost at 9:00 AM 0 comments

Unsurprisingly, the eurozone is stuck in both an economic and political malaise; as Germany published weaker than expected economic figures, and France's political system falls apart.

Thus the media is doing its best to pump up the markets, by pushing the tired old line that the ECB will do something radical (eg cut interest rates and go for QE).

This is of course hyperbole, as the ECB (in the shape of Mario Draghi) is incapable of doing anything radical. Instead the eurozone will sink ever further into the quagmire of its own economic and political structural failings.
Posted by Ken Frost at 9:03 AM 0 comments

Unemployment claimant count has fallen faster in 12 months to July than any 12 months since 1973.

Pay very weak - down 0.2% latest three months on year earlier - as expected. Test will be when bonus/50p tax distortion drops out.

More people are working, but their incomes are being squeezed. The "good times" are but a faded memory!
Posted by Ken Frost at 8:41 AM 0 comments

Despite the dire warnings about the cooling of the property market, in London at least, it seems that first time buyers are still desperate to borrow money to buy a house.

The Council of Mortgage Lenders (CML) recorded the highest number of loans (28,600) lent to first time buyers this June, since December 2007. This is an increase of 7.1% since May.

At some stage the  market will cool and rates will rise, the issue will then be can these borrowers keep up with their mortgage payments and are they in a position of negative equity?

Research from Hamptons, which specialises in selling houses in London and the South of the UK, appears to confirm reports of panic selling this year as homeowners try to cash in at the top of the market before a significant cooling next year.

This research will of course further fuel the "panic" selling, thus providing estate agents with a good fee income for the coming months.

The Chinese economy appears to be recovering.

As per Positions and Promotions, the official PMI, which samples 3,000 nationwide enterprises of various sizes, reached its highest level in more than two years at 51.7, up from 51 in June. The fifth consecutive month of recovery, was stronger than the market consensus forecast of 51.4.

The HSBC PMI, which samples 420 small and medium enterprises, showed similarly positive results reaching 51.7 for July. It indicates the strongest rate of improvement for China's manufacturing sector in a year and a half.
Posted by Ken Frost at 9:09 AM 0 comments

It would seem that the rise of Bitcoin has caught the Chancellor's gimlet eye, as a possible means of raising extra revenue.

Osborne has instructed the Treasury to assess how the UK could become a leading global centre for Bitcoin and other virtual currencies.

If it moves tax it, if it threatens other means of revenue generation regulate it!

A nice little earner!
Posted by Ken Frost at 9:16 AM 0 comments

Douglas Flint, the chairman of HSBC, has expressed concern that increased regulation of the banking industry is pushing staff to turn to unnecessarily safe activities.

“Unwarranted risk aversion threatens to restrict access to the formal financial system to many who could benefit from it.

There’s a creeping concern that staff are concerned about the penalties for getting things wrong and building risk aversion… getting to a state where there’s a zero risk tolerance.”

Flint expressed his opinion following HSBC's results, which saw a 12% fall in first half profits to £7.3BN.

As is the nature of any post binge clean up, the pendulum often swings too far the other way.

However, Flint may care to remember that these regulations (whether they are excessive or not) came into being because of the activities and risk appetite of the banks and their staff.
Posted by Ken Frost at 8:58 AM 0 comments

George Osborne has, from April next year, given people the right to access their pensions when they turn 55 rather than having to buy an annuity. However, pension companies will not be forced to apply these new rights.

In the event that companies are unable to release the cash, people can move their pensions. However, this might incur an exit charge.

Justin Modray, of Candid Financial Advice, is quoted by the Telegraph:


“I think many policyholders will be very surprised to be told, come April, that they can’t have their money and there will be a big backlash.”

As with all financial schemes, the devil is in the detail!
Posted by Ken Frost at 9:03 AM 0 comments

The Bubble is Pricked.

European stock markets have fallen again for the third day in a row.

People are becoming very nervous about the knock on effects of the sanctions on Russia, and fears that interest rates may start to rise in the US.

Are these fears justified?

That being said, markets go up and markets go down. There will always be another bubble then another crisis to prick that bubble.
Posted by Ken Frost at 9:02 AM 0 comments