The Downside of Bitcoin - Trying To Covert It To Real Cash

I'm trying to sell some of my Bitcoin, and the whole process is so terrible, it's almost hilarious.

Markets are driven by fear and greed.

Hence Bitcoin will be a roller-coaster, and is not for the faint-hearted!
Posted by Ken Frost at 10:41 AM 0 comments

The City Takes a Break

Judging by the current (lack of) price action and newsflow, it appears most of the City must have had their Christmas parties last night!

Email ThisBlogThis!Share to TwitterShare to FacebookShare to Pinterest
Labels: city

The UK unemployment rate for August to October 2017 remained at 4.3%. This is down from 4.8% from the previous year, and is the joint lowest rate since 1975: https://t.co/yBGyWFrAdw pic.twitter.com/4xsiaRlcwU

Labour's Tokenistic Gesture To Move The Bank of England To Birmingham 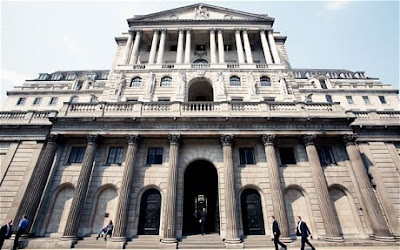 Seemingly Labour is considering relocating most of the Bank of England (The Old lady of Threadneedle Street) to Birmingham if it wins power at the next general election.

The FT reports that consultants commissioned by John McDonnell, the shadow chancellor, have concluded that the central bank’s base in Threadneedle Street is “unsatisfactory and leads to the regions being underweighted in policy decisions.”

They have recommended moving “some functions” to Birmingham, to be located “next door or close to” the National Investment Bank and Strategic Investment Board, organisations that Labour plans to create on entering government. Labour’s policy review will include whether the governor should also be based in Birmingham.

“All three, side-by-side, would constitute a new ‘economic policy’ hub,” said an interim report by consultants GFC Economics and Clearpoint Corporation Management. The report suggested moving the BoE’s premises “close to” Birmingham’s main train station, saying a relocation would “provide a clear, visible example of a new government’s determination to promote growth and a rebalancing of the economy”.

Well this is all very well and tokenistic. However, given that McDonnell's first act (if Labour gain power) would be to take over the Bank and remove its independence, moving it away from its main stakeholders (ie the Labour government) seems a tad stupid.

Whilst we are on the subject, given that Unite's head office is in Holborn, whilst Unison, TSSA and the RMT are all headquartered in Euston; will Labour ask them to relocate as well?
Posted by Ken Frost at 10:27 AM 0 comments

RBS/NatWest closing 259 branches. Is one in your town? Check list here https://t.co/W4R6kPQVUb and Lloyds/Halifax/Bank of Scotland announced 49 more closures on top of 100 earlier this year. Email your thoughts to moneybox@bbc.co.uk or tweet me.